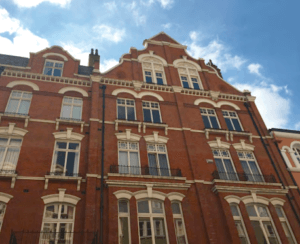 Fuller Long have won planning permission to cover alterations to the roof of a top floor flat in London to provide a better layout and improved living space. These alterations included the provision of new dormers and rooflights in conjunction with the enlargement of some existing dormers to the flat located in the Westminster Conservation area.

Carlisle Mansions was designed in an extravagant late Victorian Style. The building had a wealth of articulation and detailing, adding considerable visual interest to its facade. Additionally, the complexity of the roofscape was of significant interest, which had three large Dutch gables, one at each end and one centrally located. In this sense, Fuller Long had to acknowledge the sensitivity of the architectural aspects of the building in the Heritage Statement submitted by us on behalf of our client.

The proposed works consisted of the addition of new dormers, rooflights and solar tubes within the existing slopes, and the enlargement of two dormers. In regards to these changes, Fuller Long noted that the existing building already had a number of rooflights and dormer windows, and the wider block was also characterised by similar features. Furthermore, the works sought to improve the configuration of the flat for the current owners who were a family of 6. The proposals included several measures to improve light levels, as well as the relocation of the main bedroom to the upper part of the flat. This also included necessary improvements to the fabric and structural integrity of the flat. This was to be achieved through the insertion of steels to the roof structure to eliminate vibration lower down the building, the incorporation of thick insulation to comply with Building Control requirements and repairs to the damaged stonework of the decorative gable on the east elevation.

Fuller Long argued that the proposed changes were in keeping with the architectural character of the existing building through the use of traditional materials and detailing. The scale of the changes and degree of visibility was sufficiently small that there would be no impact upon the overall character or unity of the wider building. Furthermore, the proposals were confined to the existing roof slopes of the building and augmented traditional features such as dormers and rooflights that were already in situ. The new additions to the roofscape were sensitively designed and located and in many cases would not be visible from the public realm. Where the works had limited visibility, Fuller Long argued that they would appear entirely proportionate to the building and indeed were modest and subordinate features would respect the building’s hierarchy and architectural character.

This was reflected in the the proposals that were sensitively designed, utilising forms and materials that complemented the existing architectural character of the building. Where new dormers were minimally visible, their scale, siting and design, as well as their concealment behind existing roofscape features, would ensure that there is no harm to the external appearance of the building.  In addition, Fuller Long argued that necessary repair works would be undertaken to ensure the ongoing maintenance and structural stability of the building. This included essential works to the damaged stonework of the east facing decorative gable, which would also enhance the appearance of the building.

The proposals were not considered to undermine its architectural composition, detract from its exuberant front facade in any way or structurally impair the building itself and Fuller Long were able to gain planning permission for the works.

To discuss issues regarding a Heritage Statement with one of our experienced team of Heritage consultants, please call us on 0808 164 1288 for a no obligation conversation or email us at hello@fullerlong.com