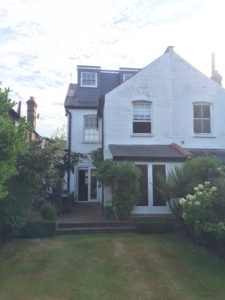 Fuller Long have successfully won an appeal for a loft conversion within a conservation area in Elmbridge.

Our client approached us after getting themselves in a tricky situation. Having gained permission for dormer windows to their home in a conservation area they submitted a further application for additional works to the roof which was refused. Following informal advice from a local councillor they then proceeded to build the additional element without permission and, once complete, submitted a retrospective application which was also refused. In addition to this decision the Council issued an enforcement notice to restore the roof back to the original permitted scheme, thus potentially incurring a substantial financial loss.

Were we brought in at an earlier stage we would have been in a much stronger position to advise on the situation. However, due to the issued enforcement notice we were given 28 days to appeal the decision and therefore we carried out an initial assessment to determine what possible avenues were still available to use at appeal, and what issues we would need to address as part of it.

The appraisal of the planning and heritage implications concluded that there was a chance of success at appeal provided that we could demonstrate that the unlawful extension was not readily visible from the public realm and was also subservient to the extension already permitted. We advised our client that a strong planning and heritage statement may prove the difference, focussing on the lack of impact of the development on the conservation area and public realm using examples from around the Borough. As a result our consultants Hannah Walker and Tim Humphries produced an appeal statement taking into account a variety of examples from both the conservation area in question and another located in the Borough to show how the Council regard the impact of residential extensions across the Borough.

The Inspector, in their assessment of the scheme, agreed with our argument that the positives of the scheme outweighed the negatives, viewing that the development had no impact on the public realm due to it not being readily visible from public vantage points. The Inspector also recognised that the Council had permitted a number of more dominant developments in conservation areas throughout the Borough, as highlighted by our assessment of similar cases.

After the result our client was relieved that we had saved him from a potentially highly damaging situation, saying “We were recommended Fuller Long to appeal on our behalf, upon retrospective planning permission for our loft conversion being refused by the Council. The team had a great understanding of the planning law and put together a comprehensive argument in the appeal process, keeping us informed throughout the process. Against all odds, specifically because we live in a conservation area, we were successful and allowed to keep the conversion. I would highly recommend Fuller Long who will offer you best chance of winning an appeal.”

The consultant leading the case, said ‘We were instructed at a point where the client was set to take a sizeable financial hit having already carried out unpermitted works to their dwelling. Thankfully we were able to save them from this by winning permission for a suitable living space for a growing family for years to come. Although we are delighted by the outcome of this case, it does highlight the importance of seeking our advice ahead of carrying out any development without permission to reduce the risk of serious financial losses!’

If you have had a planning application refused and are in need of advice on what options you have please feel free to call us on 0808 164 1288 for a no-obligation call with one of our experienced team of consultants.